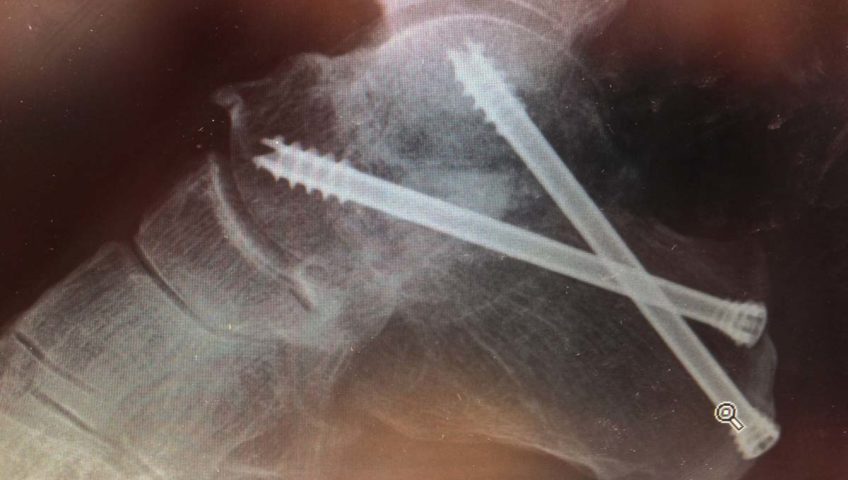 Spring 2012. I was in the consultant’s room waiting for the results of an MRI scan on my right ankle. I’d snapped my foot in two in a climbing accident and thought that 20 years of additional wear and tear, of expeditions to all corners of the globe, would have certainly been enough to cause excruciating pain in anyone’s joints let alone one that had been so heavily traumatised. I was fully expecting to be told to hang up my boots.

It had been operated on in 1994. Bone wedges chiseled out of my pelvis had been hammered into the sub-talar joint to partially fuse the ankle. I had limited mobility and zero side roll.

But after years of heavy use in the mountains it was at the point where most days I couldn’t actually stand out of bed, often taking as long as an hour before I could put any weight through my right foot. And that was after maxing out on anti-inflammatories and pain relief to the point where I rattled like the pill bottle I clutched immediately the morning alarm went off.

The surgeon clicked on the file and my scans appeared on his computer screen. With the ball-point of his pen he showed me problem – an angry looking line of arthritis arcing across the line of a ragged sub-talar joint.

“Well your ankle isn’t actually fused. You’ve broken all the bone grafts and ground them away. There’s no sign of the joint even being fused. No wonder it hurts.” There was a pause. “So, there’s good news and bad…”

I was thinking there couldn’t possibly be good news.

“I think we can fix it but we’ll have to drill a couple of screws though to hold the joint together– redoing the fusion but this time with titanium.”

He went on to explain what I knew having been ‘fused’ before. I’d be non-weight-bearing for three months.

I was ready to give him my news in return. I was scheduled to leave the country in six weeks time to climb Everest on a mission with the mountaineer Kenton Cool. We were to take an Olympic Gold medal awarded to the 1922 British Everest Expedition to the top to fulfill a promise and bring closure to their epic historic expedition. It seemed a fitting tribute in the run up to the London Olympics.

At that moment I think the surgeon thought differently about my condition.

“We need to get you in then to see if there’s something we can do for the short term. Buy you some time.”

Two weeks before we left for Kathmandu I watched an inky flood on the live x-ray flow through my ankle joint. The cortisone was administered by needle inserted deep between the bones. Like a switch had been thrown, all the pain was gone but I understood only too well that it was a ‘stay of execution’. I reached the summit with Kenton on 25th May 2012. But the screws would have to wait with the timing of surgery being critical in terms of other jobs I had lined up. I had a 2nd cortisone before another job in the Himalaya and then a 3rd before filming on the Matterhorn. By now the writing was well and truly on the wall. The pain was never under control. I couldn’t walk and the shrill of the drill was calling loud.

Having endured 21 years of pain the screws were tensioned across the joint on 22nd January 2014. I was awake throughout the operation, although totally dead to all feeling from the nipples down. I found the whole experience quite liberating, listening to the positive words form the surgical team.

When the plaster came off it was pedal to the metal, quite literally with my rehab programme. Week 6 post-surgery and I made it into a ‘moon-boot’ where Rob, my physio could start to work on the soft tissue, gently mobilizing the joint and breaking the scar tissue. I was turning the pedals on a static bike, starting with just a couple of minutes but building to half and hour every day – oh so gently at first but building as the muscles gained strength and I gained confidence.

From week 12 we really started to hammer things. Next we worked hard with the vibroplate and bossu to regain balance doing single leg dips, step-ons and even aeroplanes. Every Monday Rob would ask me to show him what I could do and the broad smile across his face told me everything. We ramped it up again.

17 weeks post surgery I was abseiling down the sea cliffs of the Isle of Lewis camera in hand filming a commercial. I felt vulnerable but it was an important step and setting goals in rehab became a vital component. The following week I climbed my first mountain.

I was warned it would take a year and, while I managed to get back to some semblance of normal pretty quickly, it was indeed a year before I felt totally happy with my ‘new’ ankle. Actually, I feel like I’ve been given a new lease of life. I’d forgotten what it was like to be pain free after so long.

My physios did a remarkable job in mobilizing and strengthening my ankle but the motivation was there to get back to doing everything I love about being in the mountains.

Normal service has been resumed.